Anarchist publications from the early 20th century wouldn’t be my immediate port of call when looking for information on the sinking of the Titanic in April 1912, but the serendipity of archives means that information can be found in unexpected places…

Cataloguing the Maitland Sara Hallinan collection last year (over 5,500 magazines, pamphlets and other publications produced by various left-wing, anarchist and protest / pressure groups between 1864-1983) was a good way to find sources that took an alternative or unexpected view of major events.

The sinking of the luxury liner the Titanic, then the largest ship afloat, and the deaths of more than 1,500 of its passengers and crew caused international shock and outrage, prompted public enquiries in Britain and the USA, and resulted in massive improvements in maritime safety. The May 1912 edition of ‘Freedom’, “a journal of anarchist communism”, devoted much of its front page to the disaster – describing it as “a horrible commentary on our social conditions everywhere”, as “one sees the class distinction and even the class struggle reflected in the doom of the “Titanic”… The percentage of doomed amongst the steerage answers to the high death-rate amongst the workers on land; the high percentage of saved amongst the saloon passengers corresponds to the longevity of the well-fed and well housed upper classes, whose wealth “saves” them on shore as it saved them at sea”.

A poem contrasting the behaviour of the ship’s owner J. Bruce Ismay (saved from the sinking ship) and captain Edward Smith (drowned) was included in another anarchist publication ‘Herald of Revolt’ : 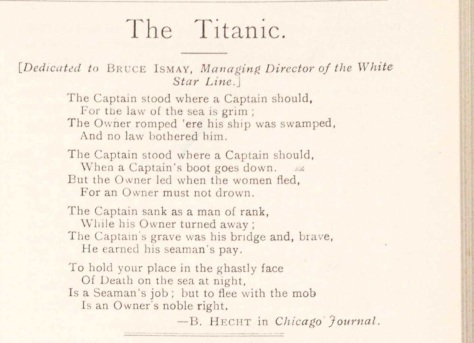 The idea of the Titanic as a metaphor for or reflection of a divided society has endured in popular culture – popping up in everything from a 1943 German propaganda film to James Cameron’s 1997 epic.

Post written by Liz Wood, Archivist at the MRC.