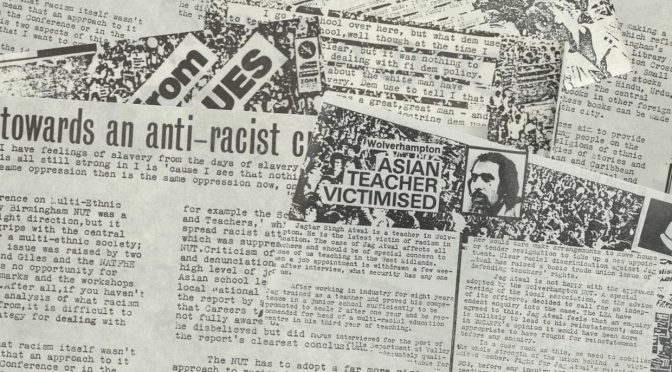 Using original and provocative material from its collections, ‘Crossing Borders’ examines aspects of the immigrant experience in Britain…

The Modern Records Centre’s newest exhibition, ‘Crossing Borders: Experiences of Immigration in Britain’, is now open for viewing. The selected primary sources focus on the following themes: Housing and Education, Racism and violence, Refugees, Employment. The sources on display share an insight into the social barriers that immigrants faced. The exhibition hosts a variety of material, including pamphlets, photographs and news-sheets. Details of personal experiences and calls to action are also on display.

The parallels of the past and present highlight the continual narrative of the immigrant experience.

We hosted an event to support the exhibition and explore its themes. We began the evening with an introductory lecture by Safrina Kumar Ahmed, which covered a brief history of immigration to Britain. The recording of this lecture can be viewed below. The talk was followed by a guided tour of the exhibition, as well as additional archive sources made available for the event, delivered by MRC Assistant Archivist Liz Wood. The event closed with a post-tour discussion seminar.

The seminar saw a lot of interesting issues raised. It began with looking at some of the key reasons that immigrants faced resistance. Health issues, an increase in crime and a struggle for employment were identified as key factors. We discussed these issues and whether there was any grounding behind these worries.

The discussion moved to how the resistance manifested: in ‘them and us’ language. Is this language still used today? We would hope that we have moved beyond discrimination and racism. However, it is interesting to look at when race becomes a factor. The group found that this was especially prominent in the media, when someone’s race acts as a defining attribute. The point was raised that newspapers seem to only highlight ethnic minorities when reporting negative events.

Safrina then moved the discussion on to segregation and integration. The group started with opinions on whether integration was successful in schools. One member of the group voiced the opinion that often British communities expected a one-way integration, where the immigrant adopts British culture. This is evident in the UK’s white curriculum and the biased attitudes through which some historical events were taught. Many members of the group had personal experiences of this and feeling alienated in the classroom. This triggered the question, ‘is it possible to keep your own identity when trying to integrate?’

The discussion ended with a focus on the implications these attitudes have on immigrants. The resistance to immigrants and organised communities can have a large impact on self-worth. There are also lasting attitudes of internalised fear, where often people feel that they should not be too overt in expressing and embracing their own culture. Members of the group had personal experiences of this and said that this was still an attitude that their family members held. For example, some were discouraged from wearing Asian clothing. This then again raised the hypocrisy in cultural appropriation by British people, as British people will often wear Asian fashions without hesitation. It seemed then that integration was not wholly possible and that immigrants will never fully be accepted. But is this final? Will immigration or race in Britain ever cease to be an issue?

The account of the discussion above details the views expressed by members of the seminar. If you would like to contribute your opinions on any discussion points, please leave a comment.

This event ran as part of the Warwick Open Education Series, ‘After Talk Must Come Action: Racial Resistance and Remaking’. Follow us on twitter and Facebook to keep up to date with news and events.

A selection of sources have been digitised and are available online, here.

We have also prepared a list of archive sources used in the event, which you can request to view.

If you would like to view these sources, please come into the centre with the source reference number. We recommend that you book a slot in advance.