The papers of Kenneth William (Bill) Wedderburn (1927-2012), Lord Wedderburn of Charlton, QC, were deposited in 2015 at the Modern Records Centre (MRC) by his widow, Lady Wedderburn, via Dr Paul Smith, Honorary research fellow at Keele University and former student at the University of Warwick. On arrival at MRC, the papers were allocated the Reference code “Acc 972” and described in the accessions ca

talogue as “working papers rel[ating] to labour law, the Trades Union Congress [TUC] and industrial relations legislation”. The collection covers the period 1960- 2009 and highlights Lord Wedderburn’s role as adviser to the TUC, and an advocate in legal cases and national debates about workers’ rights. It includes papers relating to key industrial related issues of the 1970s and 1980s: government legislation, the miners’ strike and human rights legislation in the UK and the European Union. An appeal and a successful application to the National Cataloguing Grants Scheme (NCGS) managed by The National Archives have made possible the appointment of an Assistant Archivist to catalogue and index this collection.

Lord Wedderburn’s papers comprise an extensive archive of material (more than 100 “transport” boxes). These documents will provide an invaluable resource for students of politics, law and industrial relations, as well as 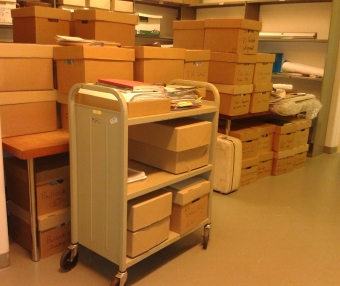 complementing MRC’s main collections concentrating on the national history of industrial relations, industrial politics and labour history. Paul Smith boxed up the papers by topic prior to their deposit at the MRC, and this has proved extremely helpful. Nevertheless, each box takes a different amount of time to uncover and list its contents, and of course, involves deciphering Lord Wedderburn’s handwriting! During the first 3 months of working on this project, the material I have listed includes papers relating to European integration, such as the European Commission (EC), European Economic Community (EEC), European Union (EU) and the European Court of Justice (ECJ), as well as European social policy dating from the 1960s to 2008. A highly topical subject given that the UK’s second Referendum on whether to remain in or leave the Europe Union takes place on 23 June 2016.

Respected as “Britain’s greatest labour lawyer” [1] Lord Wedderburn was deeply committed to the rights of workers and trade unions. He was created a Labour peer in 1977, becoming Lord Wedderburn of Charlton. During the Thatcher and Major years he opposed all eight anti-trade union bills which passed through the Lords, and saw his principal role as defending workers’ and trade unions rights. He wrote a number of comparative studies including Labour Law and the Community (1983) and Employment Rights in Britain and Europe (1991) as well as organising and attending many international symposiums on European Labour Law.

Lord Wedderburn was a firm believer in the role of the International Labour Organisation (ILO), (the tripartite agency of the United Nations) as upholder of workers’ rights. On 12 June 1995, his letter to the editor of The Independent was one of several published in response to the attack on the ILO by Sir Alan Duncan MP over the GCHQ affair. He wrote:  “European positive law does not yet support all the fundamental values at work which are upheld by the ILO” but “its programmes combine the objects of civilised standards and job creation”[2]. In his paper “Common Law, Labour Law, Global law”, Lord Wedderburn discussed the weakness of current responses; namely “regulation”, to a global economy and transitional power that posed “new and dangerous social tensions.”[3]

Lord Wedderburn chaired The Industrial Law Society’s Anniversary Conference Labour Law 2008 – 40 Years On, held on 15 September 2007. The annotated text of his talk where he looked at how British Labour Law had fared over the past forty years appeared in the December 2007 issue of International Labour Journal.[4] One of the three aspects he chose to comment on was the ongoing discussion about the contract of employment in Britain and Italy ahead of forthcoming legislation. Commenting on the House of Lords Committee on Modernising European Labour Law, he noted the committee believed that increasing flexicurity in Britain did not require changes in labour law but “action on skills and welfare to work measures”.[5]

In this talk he was somewhat pessimistic about Sir Bob Hepple’s suggestion that labour needs regulating at European level to deal with transnational corporate power in the world economy, commenting that “the inspiration of the European Commission seems hardly up to the task”[6], whilst at the same time, recognising the urgent need for the introduction of global labour standards.

In conversation with Sir Bob Hepple at a meeting of the Industrial Law Society in London on 10 March 2009, Lord Wedderburn discussed his apparent scepticism relating to globalisation and the disappearance of collective bargaining in the social dialogue at European level. He “saw a defect in the Community legal structure in that it established economic rights as almost constitutional rights for capital and employers but never affected clear, similar or parallel rights for organised labour”[7].

Lord Wedderburn was proud to be a European, yet at the same time, he was a Eurosceptic. He acknowledged a cultural affinity with the EU, describing it as a “very important organisation of advanced industrial societies”[8].

Helen Hargest is the assistant archivist working on this one year project to catalogue and index the Wedderburn papers. She has extensive experience of working with both local and business archives, including more than 14 years working at the Shakespeare Birthplace Trust in Stratford-upon-Avon. She is currently studying for a Masters in Archive Administration (Distance Learning) at Aberystwyth University.

[2] “Letters to the Editor: Continuing importance of the ILO as upholder of rights” The Independent, 12 July 1995