Take the challenge! Help to transcribe an entire volume of railway worker accidents in a day.

The MRC is excited to be taking part in ‘Transcription Tuesday’ for Who Do You Think You Are? magazine and in partnership with the Railway Workers, Life and Death (RWLD) project at the University of Portsmouth.

One of the registers from the Amalgamated Society of Railway Servants (ASRS) archive has been digitised and will be available online for one day on Tuesday 5th February for enthusiasts to transcribe its contents.

The volume contains about 2,150 handwritten records covering 119 pages in the volume which recorded railway accidents to members between 1901 and 1905. It will be a great opportunity for enthusiastic transcribers to ‘get on board’ and help to make this resource accessible and searchable for family historians and all those interested in railway history.

The idea behind ‘Transcription Tuesday’ is that anyone (not necessarily family historians, railway historians or Who Do You Think You Are? Magazine readers) and everyone is encouraged to help out on a single day with projects involving some element of transcription. In our case, this means converting the handwriting from images of original documents into typed text in a database. It means that the records become more useable, for a worldwide audience.

Many of the entries include fascinating details about life on the railways along with some very useful information on accidents and injuries.  For example, the case of J Hallams, a track worker who was hit by a train and killed on 7 January 1901 at Thackley in Yorkshire, leaving a widow and four children. They were granted £234.11.2 in compensation (around £24,100 today), of which £98.11.2 was to be paid to the widow and the rest in quarterly instalments until the youngest child was 14. A later note recorded that the mother had died and payments were transferred to an aunt.  Another entry is for P.C. Pepper, a Goods Guard on the Great Northern Railway and member of the Doncaster branch of the union. He crushed his ribs while leading horses at Ferrybridge in February 1904 and received 15 shillings per week in compensation. He was off work for 8 weeks and 3 days.

The results will be freely available online and will also be added to the larger database on the RWLD website, joining the existing 4,500 or so records and the 60,000 or so cases over the coming years. 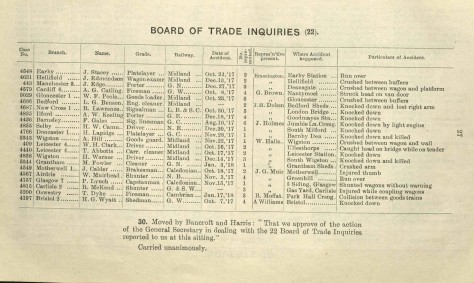 This register is only one source from our railway trade union collections but we hold many other valuable records of railway workers from 1873 onwards. Taking part in this event fits really well with our plans for the wider RWLD project which we are joining this year. There are already volunteers working on different resources at the National Railway Museum York and The National Archives at Kew. The RWLD project will enable us to get much more information about the members of the ASRS and the National Union of Railwaymen out of the volumes and into a searchable spreadsheet. We’ve just launched a volunteer project at the MRC to transcribe tables recording Board of Trade Inquiries, compensation claims and accidents from the annual reports.  Please do contact us if you’re interested.